You’ve bought in. You agree that we should make a concerted effort to grow the sport of disc golf. You don’t just use the hashtag, but you actually want to go out and do a few things too. Maybe it’s teach a couple of kids to play. Maybe it’s drag your coworker kicking and screaming out of their cubicle into that thing called sunlight. Maybe it’s joining your local club.

Then it hits you. Why? That’s right, why? Why are we growing disc golf? What’s the point? You already have discs and a local course, right? Haven’t we already been on Sports Center a few times this year? Aren’t we all grow’d up already? Why not just save the time and let that coworker wither away to nothing in their cubicle? That’s easier, isn’t it? 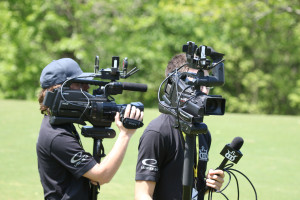 Sit back and close your eyes (OK, don’t actually do that until you’re done reading). Imagine with me the world we could end up living in if we grow disc golf… A lot. I don’t mean a couple more features on ESPN. I mean GROW!

Your alarm goes off. You drag yourself out of bed and into the kitchen to put on the coffee. You reach into the cupboard and grab the box of Wheaties. Gracing the cover is this year’s World Champion Arian Jenkins (how could he not be after being born into that family?!).

The BMW open was this past weekend. Paul McBeth won the top prize in Open Masters taking home one of those big cardboard checks for $86,000. Little Willy Shusterick Jr. took down the open division to the tune of $132,000.

You sit there letting the coffee work the haze out of your still sleep clouded mind as your kids come rushing into the kitchen. They are running late as usual. You packed their lunches last night.

You also packed their disc golf bags since they both have practice after school. Your daughter is playing varsity this year. Your son just made the JV squad.

Both of them are getting really good. Your daughter has already been offered a scholarship to play for Notre Dame. Your son has his eye on Harvard. If it wasn’t for disc golf, you wouldn’t be able to send either of them to such prestigious schools.

Later that morning, you roll into the office. It’s Friday and you have a light day. So does your boss and she decides you should cut out early to go squeeze in a round of disc golf at the club.

After the round, your wife meets you for drinks and a nice steak dinner in the club house. Dinner conversation iOS dominated by a debate over who will take down the FPO division at the upcoming Nike National Championship. You bought tickets months ago and have been eagerly awaiting it ever since.

After dinner, you take the whole family out for a round of glow golf on the new course just installed down the street from your house. It’s the perfect way to end what turned out to be a great day.

Are you motivated yet?

“We have the power to make the world a better place for disc golf.”

So get up and grab your coworker from that cubicle. It’s sunny out and it’s time to play some disc golf!

One thought on “You’re in, now what?”